Mid – Autumn Festival this year fell on the 1st of October 2020, also known as “Moon Festival”, as during this time the moon is believed to be at its fullest. People gather together, also because the full moon is a symbol of family reunion. 月饼 moon cakes are typically consumed on Mid-Autumn festival. It’s a kind of cookie with various fillings and different artistic patterns on the surface, depicting the legends of the festival and conveying auspicious meanings. The origin of this cookie can be traced back to Shang (17th century BC – 1046 BC) and Zhou (1046 – 256 BC) dynasties. Moon cakes have a round shape as they represent the moon. As the festival is a time for family gathering, the cakes have a round shape also because “round” and “reunion” have a similar pronunciation in Chinese. The origin of Mid – Autumn festival is actually very old and goes back to when the moon was worshipped during the harvest season in autumn. Many are the legends related to this festival, among which we want to mention:

Chang’E Flying to the Moon – The legend is about Chang’ E, the goddess residing on the moon and wife of the hero Hou Yi, who sacrificed herself to save her husband.

Rabbit in the Moon Story – The legend tells the story of a rabbit who sacrificed itself for the Immortals. Therefore, they sent it to the moon to become the immortal jade rabbit, who lives in the Moon Palace with Chang’ E 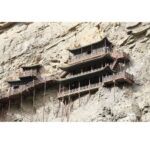