On the 11th of June 2018, an important meeting took place between the leaders of these two institutions, China Society for Human Rights Studies and the Italy China Institute, at Palazzo Clerici.

On the side of the CSHRS there were:

On the side of IIC there were: 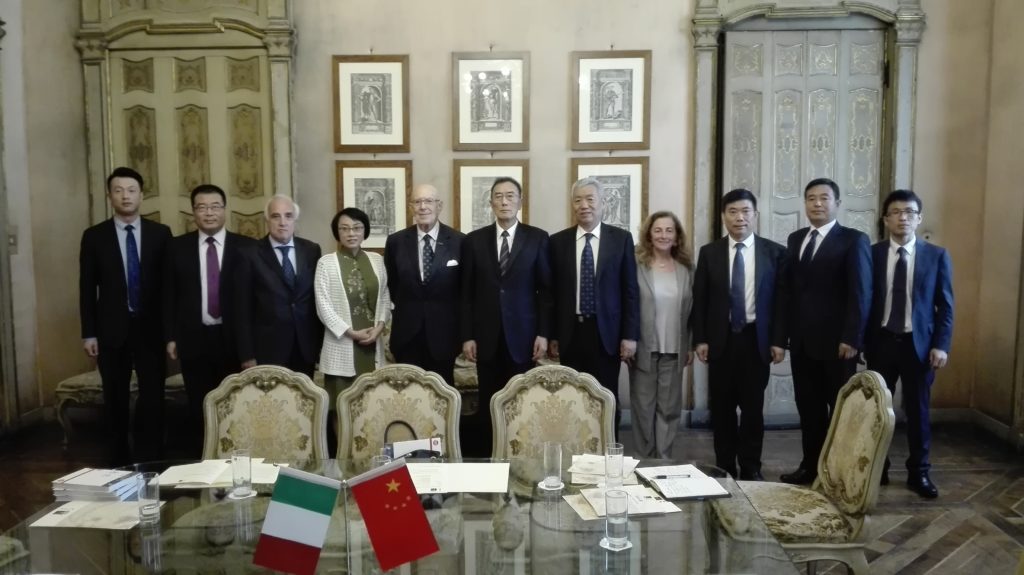 President Boselli gave a warm, cordial welcome to the delegation in Milan and illustrated the characteristics and purposes of the Italy China Institute:

The establishment of the Italy China Institute (IIC) for the economical and cultural exchanges goes back to the 17th of March 1971 by the will of President Vittorino Colombo, from the need to integrate normal diplomatic activity with specific action to promote relations between the two countries.

Colombo deeply believed in the mission that had been entrusted to him, founding the Italy China Institute and relaunching the role of the Chamber of Commerce, thus opening a breach in the “bamboo wall” that kept China separate from the rest of the world.

After the death of the President (June 4, 1996), the Institute became the Vittorino Colombo Institute for the development of cultural, economic and political relations with the People’s Republic of China, briefly referred to as the Italy China Institute.

The Institute has always aimed to develop cultural, economic and political relations with the People’s Republic of China. This political and operational commitment was maintained through multiple initiatives and intense collaborative relationships between the two Peoples and the two Nations. It was also implemented thanks to the fulfillment of twinning between cities, travels, cultural events and many other initiatives between Italy and China.

President Qiangba Puncog thanked everyone for the warm welcome and talked about the CSHRS’s activities.

CSHRS is governed by the National Council. The board meets every 5 years and has 177 members. The current President is Mr. Qiangba Puncog and the Vice Presidents are Mr. Xu Xianming, Mr. Li Junru, Mr. Shen Yongxiang and Mr. Fu Zitang. Mr. Lu Guangjin holds the position of Secretary General.

An interesting exchange of views followed between the Presidents and the members of the two delegations which allowed to verify the complete identity of views on the issues covered by the activity of the two institutions.

The IIC has declared its willingness to be the interlocutor of the CSHRS in Italy also thanks to the role that Consul General Song Xuefeng will play in this regard, for the realization of projects of common interest.

The historic role played at a high level by President Qiang Puncog and the long, qualified presence in China of President Mario Boselli since 1978, have allowed to create a climate of friendship and collaboration between the two countries in the belief that today’s meeting goes in the sense of a further strengthening of these feelings.